OFFER TO THE MUSEUM

We warmly thank Mr Angelo Lavrano, grandson of the Chief of scouting in Corfou, for his offer of many historical books conserning our island. 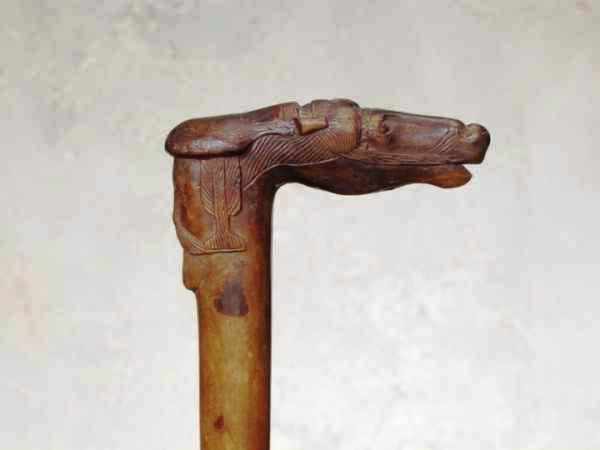 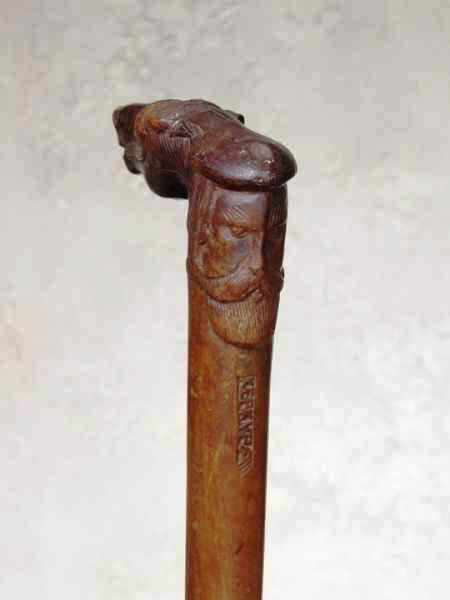 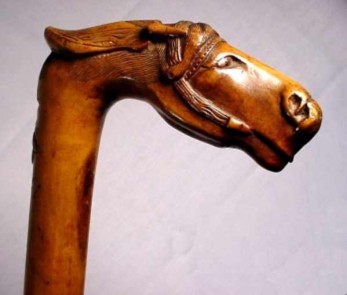 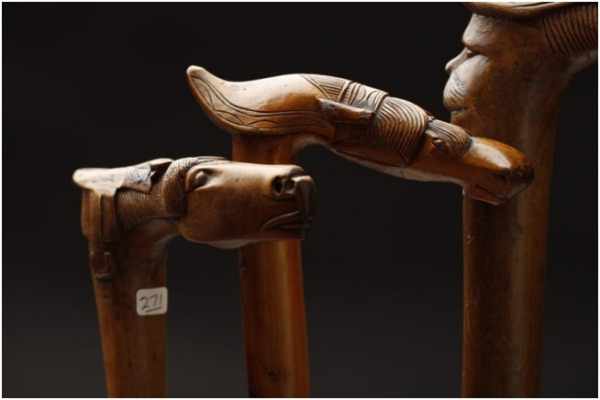 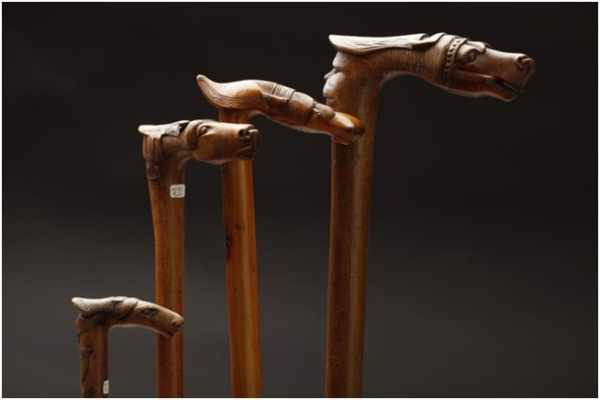 For the nineteenth- or early twentieth-century traveller disembarking at Corfu after the voyage from Italy, Corfu represented the first taste of the East. Lying closer to Constantinople than to Venice, and with the curious admixture of cultures that its history had provided, arrival in Corfu clearly signalled that the tourist had finally left home turf. Moreover, the land they discovered was blest. For many, schooled in classical texts and the ‘dead language’ of the Greeks, it could hardly be otherwise. They now found themselves washed upon the shores of ancient Scheria, alongside Odysseus, surrounded
by a decidedly alive Greek population. They traced Homer’s topography, sought out the garden of Alcinous and resemblances to Nausicaa, and revelled in the manifestation of the stories they grew up on. Alongside the classical allusions, those arriving from any direction discovered that Corfu, with its gentle climate and idyllic landscapes, was an earthly paradise.
Strolling out of town towards the battery of an evening, or travelling along the much-praised roads on excursions into the interior, the one thing that tourists remarked on above all else were the forests of olive trees. Used to seeing pollarded olives in demarcated plots throughout the rest of Southern Europe, Corfu’s unending seas of tall, exuberantly branching trees were perhaps the most remarkable spectacle the island had to offer. The visitors measured them, counted them, picnicked beneath their branches and waxed lyrical about their beauties. Combining unusual elegance with associations both ancient and scriptural, as well as being the mainstay of the island’s economy, the olive trees encapsulated Corfu. How natural, then, that visitors also wanted to take a piece of this magnificent forest, in the form of an olive wood souvenir, away with them as a keepsake of their stay.
The burgeoning nineteenth century obsession with souvenirs created markets for every conceivable form of keepsake. Wherever the traveller alighted, something could, and in many cases had to be purchased to record the visit. Olive wood items from Corfu formed just one such group of souvenirs, and countless thousands of the island’s wooden boxes, bowls and paper knives were distributed around the world, jostled together in traveller’s trunks together with Venetian glass, Black Forest bears and Genoese velvets. Generated before the advent of mass tourism, these carvings were often skilfully produced, lying at the woolly interface between mass production and what would now be termed ‘folk art’. Amongst all the olive wood souvenirs from Corfu, the ones that probably achieved the highest international visibility were the carved walking sticks produced during the nineteenth and early twentieth centuries.
Olive wood canes from Corfu, usually but not always inscribed ‘κερκυρα’, most frequently have horsehead handles, but are found with a great variety of other carved subjects. Many feature the stylized faces of Corfiot men, and, rarely, women. Produced at a time when walking sticks were an essential accoutrement, and ubiquitously used, Corfu canes would have struck up a very different relationship with their new owners than other keepsakes. Up until World War I, after which the vogue for walking sticks markedly declined, canes were seen as more than fashion items: they were constant companions. While other souvenirs sat gathering dust on a shelf, the Corfu cane, if properly suited to its owner, would in many cases develop into a trusted friend, a conversation piece and an item of personal sculpture, to be used, ‘worn’ and caressed. Arguably, these olive wood walking sticks would have stimulated memories of their owners’ voyages to the land of the Phaeacians more, and in a more evocative way, than any other souvenir.
(Text by Adam Smith) 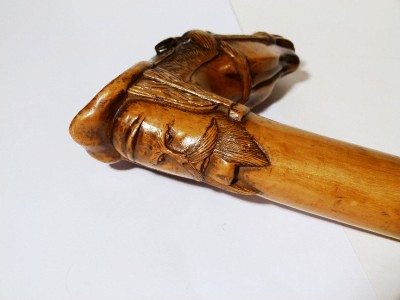 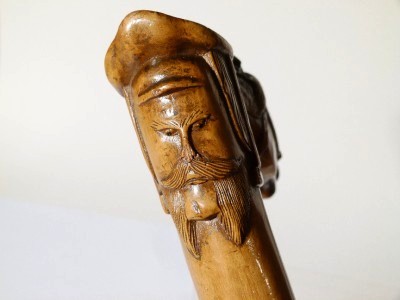 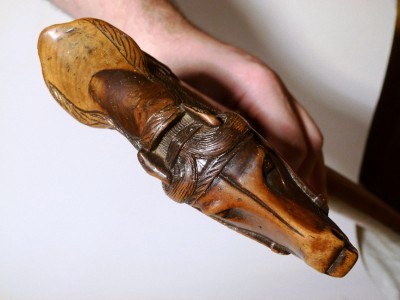 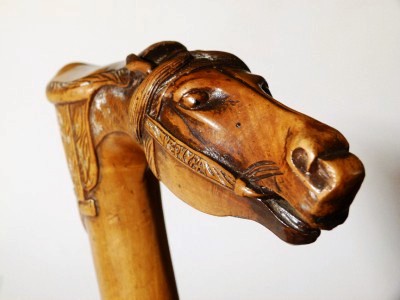 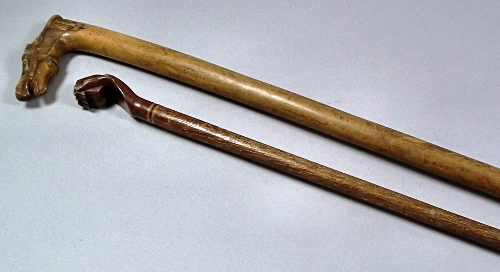 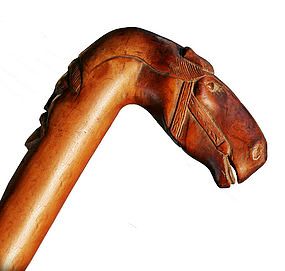 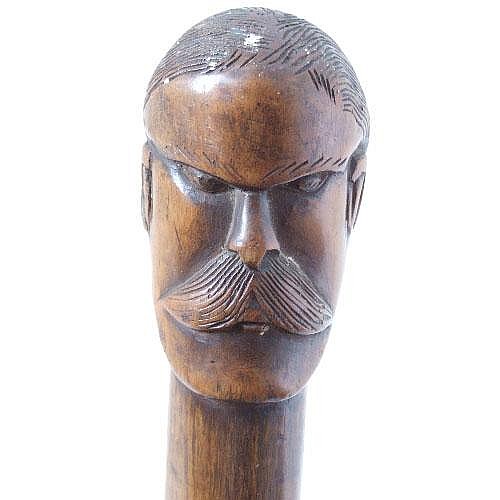 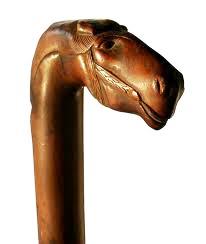 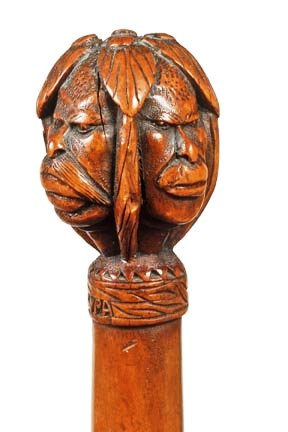 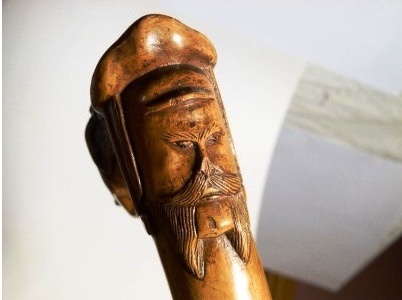